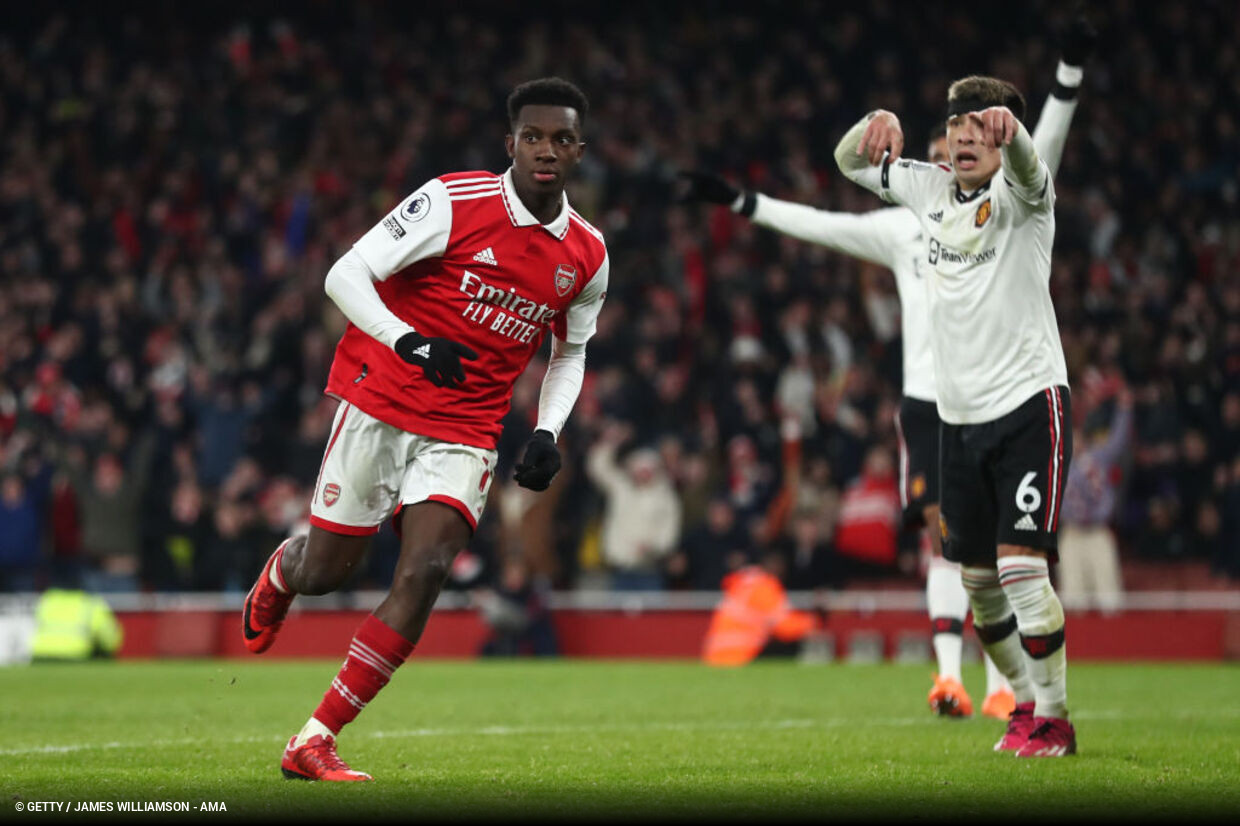 Arsenal reclaimed a five-point lead in the Premier League after Eddie Nketiah’s last-gasp winner helped Arsenal complete an amazing comeback in a 3-2 win over Manchester United at the Emirates on Sunday.

Action: Arsenal kicked off at the Emirates knowing they needed a win to put some distance between themselves and Manchester City.

However, Mikel Arteta's men fell behind with 17 minutes on the clock when Marcus Rashford robbed the ball from Thomas Partey, exchange passes with Bruno Fernandes before unleashing a powerful shot from 25 yards out into the bottom corner.

But United’s lead did not last long, as the hosts levelled seven minutes later when Granit Xhaka whipped in a perfect ball from the left to the back post, where Eddie Nketiah headed home the equaliser.

The Gunners completed the comeback in the 53rd minute after a moment of inspiration from Bukayo Saka, who drove in from the left wing and hit a sensational finish low into the far corner.

Arsenal's lead lasted only six minutes as Aaron Ramsdale came to claim a corner but could only parry the ball into the path of Lisandro Martinez, whose looping header found the net to level the game 2-2.

Saka came close to putting Arsenal back in front shortly after his deflected shot off Christian Eriksen struck the post.

Mikel Arteta's side piled on pressure in the dying moments and were rewarded when Nketiah grabbed the winner in the 89th minute after tapping in a shot from Martin Odegaard to put his team 3-2 up.

Big Picture: With this result, Arsenal remain top of the table, five points ahead of Manchester City with a game in hand, while United are in third 11 points off the leaders.

Next up, Arsenal are next in action away to Manchester City in their FA Cup fourth-round tie next Friday, while Man Utd take on Nottingham Forest in the first leg of their Carabao Cup semi-final on Wednesday.

Stat of the Day: Bukayo Saka is the third Arsenal player to score in three consecutive Premier League games against Manchester United, after Freddie Ljungberg (1998-2000) and Thierry Henry (2000-2001).